The Wreck of the Annie Jane

This book is now available to buy from www.acairbooks.com 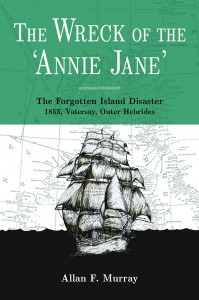 Captain Mason gathered them all on the beach and made a head count and a list of the survivors. Of the crew there were 36 survivors: 12 had drowned. Of the 12 cabin passengers, only four had survived, and of the steerage passengers 46 men 16 women and one four-month-old baby had survived. According to Mason they numbered a total of 101, plus the baby who, for some reason they did not count as a survivor. Assuming there had been the full complement of 385 emigrants aboard, then strewn along the beach and still caught up in the wreckage were 329 bodies in total, but children under ten travelling with parents were not even listed as names on the passenger list, so, the real figure would have been much higher. The wreck of the ‘Annie Jane’ remains, even today, one of the worst maritime disasters in British peacetime history.