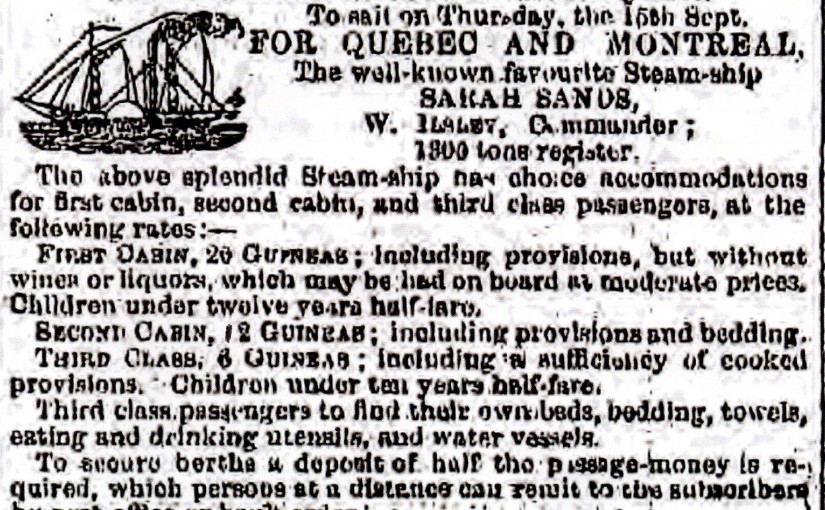 Extract taken from, The Wreck of the Annie Jane. Part of a letter of complaint  sent by the steerage passengers on the voyage that left Liverpool on the 16th of September 1853; published in the Montreal Chronicle

Firstly, we were stored in berths to contain three with barely sufficient room for two and provisions served of such an inferior quality that they could not be partaken of, the greater part being entirely rotten, consequently unfit for human food….. The passengers were generally stowed or berthed irrespective of sex, which tends greatly to promote immorality in all its demoralising effects.

Thirty are known to have gone on the Sarah Sands which sailed on the 16th September 1853. These are all possible passengers; unfortunately the list of passengers published in Canada just said, after listing all the gentlemen and ladies “and 170 steerage passengers” .

Image of the steamship Sarah Sands

Built in Liverpool the SS Sarah Sands was launched in 1846, just three years after SS Great Britain, and was only the second large, iron screw steamer to be built. Although intended to be powered by sail as much as possible, the Sarah Sands would use her engines when becalmed or when exiting or entering a harbour, the engines at that time were to inefficient to use for a complete Atlantic crossing.